20 November 2017
John Grasmeder
Chief Scientist
Share
Why is crystallinity in polymers more complex than in other materials and how can PEEK´s crystallinity be influenced during processing and cooling? This introduction explains the context.

In part 2 of the High-Performance Polymers series, we mentioned how the building blocks of the repeat unit of PEEK – the basic building block of the long PEEK polymer molecule – influenced its properties. In addition to the shape of the PEEK molecule, how it is arranged next to its neighbouring molecules is also important in determining the properties of the bulk polymer and this leads us into the field of polymer crystallinity.

Crystals have an ordered and regular structure and have a well-defined melting point – think about ice, salt, sugar, amethyst. Amorphous (from those Greeks again, meaning “without form”) materials, like glass, have disordered structures which when heated up gradually soften before becoming viscous liquids.

Polymers can be amorphous or crystalline, depending upon a number of factors including the shape of their repeat unit, their molecular weight and their thermal history. Crystallinity in polymers is more complex than in other materials because of the long polymer chains. In some areas, the polymer chains align and pack together to form crystals; in other areas, the chains are disordered and cannot pack together, so semi-crystalline polymers tend to have crystalline regions dispersed within amorphous material. Strictly speaking, crystalline polymers are rarely, if ever, fully crystalline; they are semi-crystalline because there are always some amorphous regions caused by those long chains never fitting together perfectly. 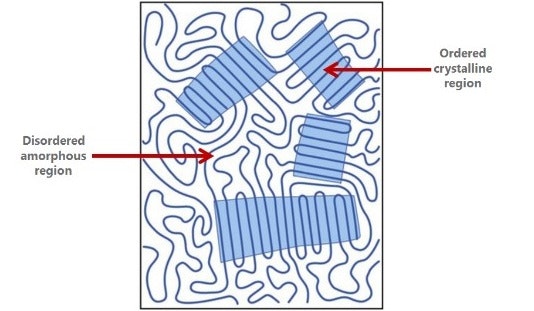 The crystalline regions, being more closely packed, are denser than the amorphous regions, so if you know the density of the polymer crystal, you can calculate the degree of crystallinity of a polymer from its overall density. Typically, high-performance polymers of over about 25% crystallinity display the characteristics of a semi-crystalline polymer.

In medical, PEEK-OPTIMA™ Ultra-Reinforced can offer the strength of metal in a composite polymer, suitable for trauma plates and nails, while remaining lightweight. 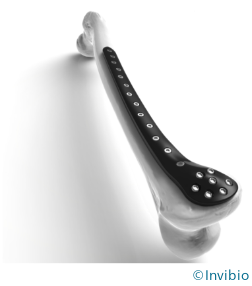 In medical for example, PEEK-OPTIMA™ Ultra-Reinforced, a carbon fibre-reinforced PEEK (CFR-PEEK) has attracted interest. The material can offer the strength of metal in a composite polymer, suitable for trauma plates and nails, while remaining lightweight. With its favourable modulus of elasticity, it seems to provide the potential for enhanced stress absorption and load-bearing by allowing the design of a less stiff construct, which may support the healing process. It has also been shown to have a 50 times greater fatigue life than equivalent metal plates.*

Metal-free distal femur fracture fixation plate made with PEEK-OPTIMA Ultra-Reinforced polymer, a carbon fiber composite from Invibio; The trauma plate shown is not available for distribution or implantation - © Invibio

The influence of temperature control during injection moulding

Injection moulded PEEK is typically about 35% crystalline. Proper attention must be paid to the temperature of the injection mould tool to ensure it is hot enough to produce parts of consistent crystallinity (temperatures in the range 170 - 200°C are typically used in our laboratories): a common mistake is to use mould temperatures which are too low and this can result in parts with darker, amorphous skins.

Here’s the difference in extremis on some test specimens: 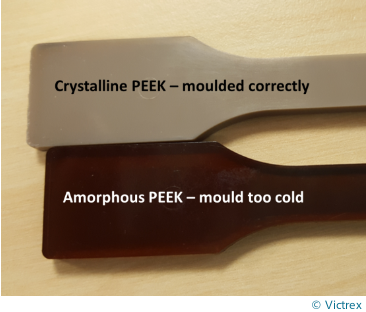 On real components which are more complex shapes than test specimens, this sort of appearance is typical if the mould temperature is too low: 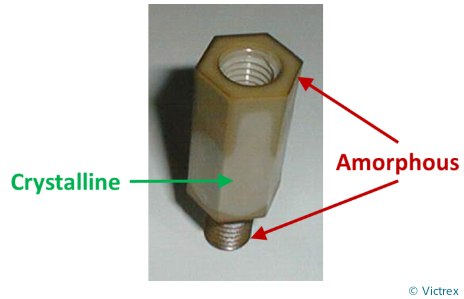 So you can see PEEK’s crystallinity is influenced by how it is processed and especially by how it is cooled from the melt.

If you cool it really quickly – at more than 700°C/minute – the polymer chains do not get time to order themselves into crystalline domains, so you will make an amorphous PEEK. Victrex does this deliberately for some of its APTIV™ film products used in thermoforming applications. Consistent with the table above, the transparent, amorphous APTIV film softens and is easily formable at temperatures around 180°C, at which point it spontaneously re-crystallises (as the polymer chains are sufficiently free to move and re- organise themselves into crystalline domains at this temperature) and it becomes more opaque. Compare that to crystalline APTIV film, which can only be formed at temperatures above about 330°C. 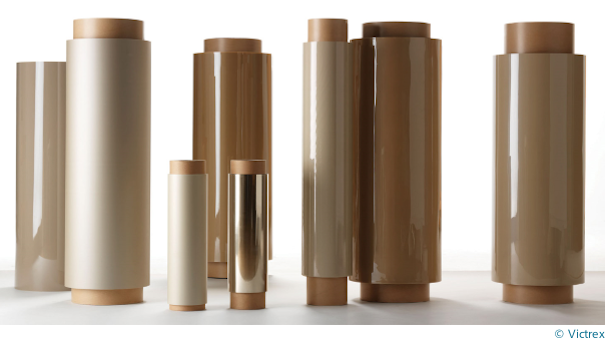 Secondary crystallisation of PEEK during annealing – scientific debate ongoing It is also quite common in some applications – like extruded rods, shapes and plates – to post- anneal the parts, a process which can result in increased crystallinity. Again, annealing takes place at higher temperatures, typically around 230°C, and some re-crystallisation occurs, leading to products with up to 40% crystallinity. Additive manufactured PEEK parts, made by Selective Laser Sintering, can have around 45% crystallinity or more. Secondary crystallisation of PEEK during annealing has been debated for many years and even today the detailed mechanism is still the subject of scientific debate!

Dr John Grasmeder has over 25 years’ experience in the polymer industry, in R&D, commercial and business leadership positions at ICI, BASF, Hoechst and Shell joint ventures in both the UK and Germany.  He has been with Victrex 11 years, and was Technical Director from 2010.  He became Chief Scientist in 2016.